The statement of Xanthi says it all

A lot of crazy incidents took place last weekend in both leagues. The statements that followed by some clubs were a new hit to the reputation of the Greek soccer. The fixed matches scandal of season 2010-11 was expected to change things once and for all. Unfortunately it became very clear that we still have a very long way to see better days. I believe it will happen someday but do not expect it any time soon. Let’s take a look at what happened and how the officials responded to it:

Apollon Smyrnis was the first team to make negative statements last Saturday, because of a penalty kick that was awarded to Panionios to give them the win. The owner of the club, Mr. Vellis was furious after the match with the referee, Mr. Abarkiolis not only because it is clear that Dounis (Panionios) dived but also because he did not award Apollon with a penalty kick at 54’.

After a close look in both cases, I believe that none of them should be awarded. However, if the referee was strict enough to award the first one when Dounis got “electrocuted” with a soft touch at his shoulder, he should have done the same when Ambrose was pulled by a defender in the small box of Panionios. Ηe penalized the player with a foul instead.

Mr. Vellis had scheduled a meeting yesterday to decide whether Apollon will abandon their relegation fight by exiting Super League. The decision was that they will continue but he will resign at the end of the season. In his statements to sport-fm earlier this morning, he insisted that everything is “marked and predetermined, there are referees who take instructions and that there is an Omertà between the clubs”.

Aris was the next team to follow with negative statements on Sunday. The match against Platanias was expected to be tensed as both teams are involved in relegation battle. Everything was going well but, with the score at 1-1 at 77’, a decision by the linesman set the match on fire after giving a goal for the home side without the ball passing the goal line. Unfortunately, there is not a camera that can help us on this.

My opinion from the angle that I watched it, combined with the absence of any reactions by the players of Platanias when Dioudis’ saved the ball (none of them complained for a goal) tell me that the linesman was wrong. The whole team of Aris, and I mean EVERYONE, including the coach, the players from the bench, the staff and their chairman surrounded him protesting for his decision although they knew they should not. The result was to see Aris receiving two red cards giving a great advantage to Platanias.

Strange coincidence: The same referee was assigned to the SAME match last season. Aris also lost that match playing with a man down since 51’. The statements from Aris’ side before the match clearly showed they remembered him. This useful tip was included in almost every betting magazine or website in Greece. I wonder how the officials decided to assign this man when they knew how biased people can be in cases like this…


PAS Giannina also protested for the referee of their last home match against Veria (0-1). The reason was a penalty kick that was not awarded while the match was 0-0. There is a Greek saying that an image is like a thousand words. So take a look in the photo they published in their official webpage. There is no other need for comments here with the exception that this decision killed my Pick of the Day last Sunday…

Panachaiki was humiliated by 4-0 in the away match against Panaigialeios. This match was crucial for both teams in their battle for the Playoffs. Many websites and newspapers wrote about an attack that took place by fanatic supporters of the home side when the bus of Panachaiki arrived. They were protected by police forces but an eighteen year old fan was injured while some wrote that the same happened with three policemen. Panaigialeios denied the severity of the incident and in their statement to the press claim that most of the sources are inaccurate. They also claim that the police was “excessively eager” in their duty to protect Panachaiki and this is how it all started.

Mr. Koughias, the chairman of Panachaiki is known for his constant statements for referees and other “forces” that keep stopping the team to promote. The truth is that he does it so often that I do not know what to believe any more. When the match ended he stated that there is a criminal organization controlling everything and that the administrative board of Football League is not willing to do something about it. He characterized the competition as “dirty” and he also said “they have filled Super League with small village teams and sent teams like AEK, Iraklis, Larissa, Aris and Panserraikos to Football League 2”. He also announced that Panachaiki will exit the competition immediately. The team has trained and according to some late news they will continue but Mr. Koughias announced his intensions to resign when at the end of the season.

Needless to say that all the above were followed by new statements from the rest of the clubs in both leagues. The Hellenic Football Federation and Super League decided to hold a common press conference to address all these matters that came up simultaneously. Mr. Sarris and Mr. Moralis practically answered all the above by asking anyone who has strong evidence for suspicious conducts to come forth. Furthermore they are open to suggestions that will improve the domestic competitions.

Sadly, all these things took place in a week we should be proud that one Greek club, Olympiakos, advertised the product that is called “Greek Soccer”. And do not forget that we are only a few hours before Day 27 that will also have the Greek El Classico, the rivalry of Olympiakos against Panathinaikos.

I do not like to generalize but wherever there is smoke, there is usually a fire. It is certain we need to improve our domestic competitions. With the exception of Olympiakos who is rich, the rest of the teams are far away from competing not only with the Champions but also against average clubs in European competitions. The problems are there and for some strange reason, the Hellenic Football Federation and the Leagues act like someone else should do something about them. As a soccer fanatic, I did not like their “waiting for suggestions” attitude. It is time for actions. Maybe they will understand it better if they ask the following questions to themselves:

How many of the 5-6 teams we have (or had) each season in the European competitions made it until March? Or, how many made it until January?

How often are our National referees assigned to important UEFA matches? If they are that good why UEFA keeps them out? I guess they do it to help the referees of other countries improve their experience…

What is the attendance percentage for the so called “product” Super League and Football League offer? A look at the official attendance numbers (4021 spectators) says that the financial crisis is not your only problem gentlemen. By the way, there no official number available for Football league… 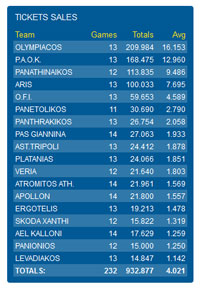 Mr. Panopoulos, the owner of Skoda Xanthi, is known for his smart and sometimes eccentric comments. There is no better way to express the shameful things that go on than using part of the statement that was published in the official page of the club:

“They spit on us and we think there is a rain? QUO VADIS gentlemen?”

Mar 20, 2017 at 19:06
We use cookies to ensure you get the best experience on our website and for advertising purposes.Got it!NoDetails